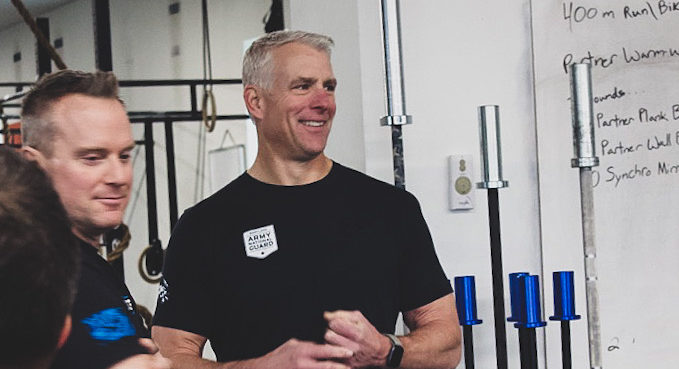 Rick took a circuitous route to find his home at Blue Crab Fitness. While a three-sport athlete in high school and Division I football player at the University of Maryland, Rick found lifting weights and eating as much as he could at the training table, critical to his success on the field. After his football career ended, he found himself weighing a little more than necessary at 275 lbs. With better than average strength and good amount of unneeded body weight, he decided that distance running was the best way to take off the pounds. Rick began his career as a federal agent with the United State Secret Service weighing 215 lbs and over next two decades he jumped from one type of fitness routine to another. Rick competed as a triathlete, spent years as a distance runner, tried various lifting routines, but always battled with knee and lower back pain while fighting the boredom of “90 day!” programs and the absurdity of “Chiseled Abs!” programs.
It was in 2008, while a tactical training instructor and physical fitness coordinator with the Secret Service, that Rick discovered high-intensity, CrossFit style workouts.These workouts were tough, unpredictable, and brought to him and the fellow agents he was training, an increased level of mobility, strength, cardiovascular endurance, and relief from chronic pain. Rick was also fascinated by the way these workouts bound the classes together through shared adversity.
Rick loves the inclusiveness of Blue Crab Fitness workouts. He also enjoys the functional nature of the programming and finds satisfaction in coaching athletes to find increased strength and better mobility. Rick finds great satisfaction in helping people find their true capabilities and accomplish tasks that they never thought they could achieve! Given his long career in law enforcement, Rick loves how Blue Crab Fitness is insistent on their athletes consistently displaying proper form prior to increasing intensity.
When not at Blue Crab Fitness, Rick can be found visiting with his oldest daughter Hailey in Washington, DC, watching his younger daughter Alex perform on the Baltimore Ravens Cheerleading Team, or sitting in the stands at the University of Maryland Baltimore County watching his son Trey play lacrosse.

Schedule A No Sweat Free Intro